The Curious Case of Indian Graffiti....

April 23, 2009
The thing with Indian graffiti is that in most cases only the guy who writes it can make out what it is and have a good laugh about it.. cos either his handwriting would be a graphologist's nightmare or it would give the creators of spell check a massive heart attack..
over the years ive seen things written on,in,below,between,along,above.. using up every possible centimeter available of various canvasses from restrooms,to trees.. to UNESCO world heritage sites! and the all time favorite Indian graffiti muse.. "the public transport". But the thing that struck me most was the passion with which they do it, so much effort.. chiseling on sandstone or concrete is not easy... 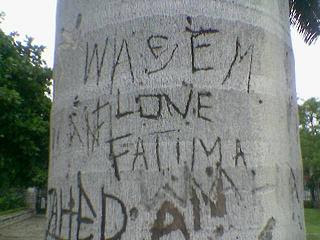 Although you would have seen a thousand examples of this dying art.. some of them just stay with you, either for their stupidity or uniqueness.. below are some of them that most of you might have seen.. but lets revisit to see if they were Write or wrong!

Fast fact: Most of the graffiti is based on one's profusion of love for another.. and the names that have appeared the most are fatima,saleem,raju and priya (no offense to them .. but next time u see something, i think u might agree :)) 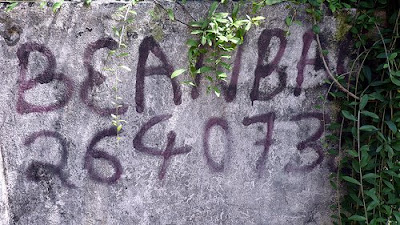 Artifact 1: If you are from Mumbai, then you must ve read the most prevalent graffiti all over mumbai from Virar to Cuffparade.. "Beanbag 26407367" sprayed on walls in red/black paint. I am not sure if it is the best way to market for a bean bag.. i dont even know if there is a beanbag business at all. I should try calling that no. some time.


Artifact 2: The "Heart" of/on public transport, with cupid's arrow all bent,beaten going through it. The heart obviously will have 2 names on either side of it.. but it is amazing... how consistently people produce the heart with the same crooked arrow with their names. I think it must give them some kind of a high to know that so many people read it.. oh i almost forgot to mention that MOST people DON'T notice it and its only people who haven't written a blog for a long time that notice them... 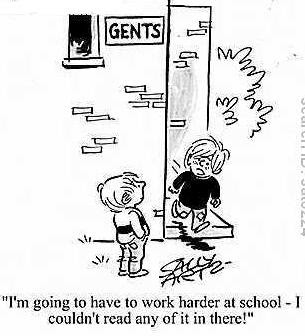 Artifact 3: "Abuse" - mostly found in restrooms or what we used to call "Bad words written in the school bathroom" :) you get to read it every time you visit that place and end up reading it and sometimes marvel at the genius or give him back the same abuse.. im still trying to recollect what was written in my school bathroom.. dammit cant recollect

Artifact 4: Benches,Desks. Well this one gets refined as you move from school to college to PG.. you learn to shrink it and use associative aides like a mobile phone or paper & pulp.. its just paper actually. A Geometric compass used to be handy in school and the best part of wooden desks is that after few months.. (just in time for the next set of exams) the bench somehow becomes clear to bear the next round of formulae/theorems/statistics.... long live strict invigilation! 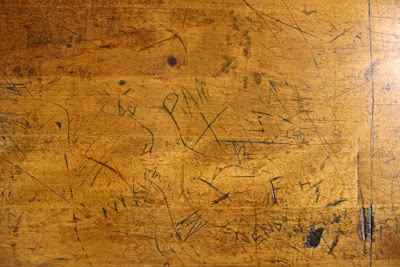 Artifact 5: World heritage sites.Wouldn't Shahjahan's masterpiece look even better with another 12,856 love stories inscribed on its walls! The monuments once in a while undergo face lifting or restoration.. may be they want to hide all the graffiti on it!! I seriously don't understand when ppl sneak in and write their love stories on them.. and that too while dodging all the pan stains on the walls!

Leave these ones that stick out prominently and you have many other masterpieces that can be discussed.. but have got an IPL match to catchup with.. Deccan chargers have actually started
winning. I thot i was dreaming.. but if i were dreaming id actually be looking at a graffiti less Gateway of India.. lets just hope this dream does come true!

PS: About the Deccan Chargers thing.. turns out i was dreaming...! :(

Tanushree said…
:) I am sure all the salims and the rajus are on a lookout for new canvasses now...maybe the Himalayas or the Moon..or wait a minute..are they already artifact 6 and 7 ??

Unknown said…
i thot anup tried inscribing two new names over bus No. 25 but cudnt find space because of saleem,raju,priya,etc and hence it ultimately became a curious case of our witty guy "Onuff"
1:36 PM

Agasti Kale said…
Nice comments dude.. here's one on ur school restroom wall.. A cross with note...."If you can reach this high - join fire brigade.."

Anonymous said…
I found this site using [url=http://google.com]google.com[/url] And i want to thank you for your work. You have done really very good site. Great work, great site! Thank you!

Anonymous said…
Who knows where to download XRumer 5.0 Palladium?
Help, please. All recommend this program to effectively advertise on the Internet, this is the best program!
1:48 PM

Graham said…
View some more desk graffiti at http://vtdeskgraffiti.com
4:49 AM

Unknown said…
By the way, Bean Bags is actually a thriving business, developed on no-frills marketing strategy. The brain behind it was interviewed by, hold your breath,...Mumbai Mirror!!!!
The newspaper forgot to mention that at a later stage the person was put in for distorting public property! :P
8:06 PM

Wilson said…
Who knows where to download XRumer 5.0 Palladium? Help, please. All recommend this program to effectively advertise on the Internet, this is the best program!
6:47 PM

Popular posts from this blog

The Reluctant lyricist - chronicles of the Insane..

December 01, 2009
After a self imposed hiatus due to my inability to maintain a work life balance , i am back to doing wat i really like.. writing crap and spamming ppl's mailboxes to read it :) So here i am being a reluctant lyricist to satisfy the gulzar in me... Apart from a few aberrations like himesh reshamiyya, altaf raja, anu malik (non-filmi) and their kin.. hindi music has been pretty enjoyable over the last few decades.. well that just made me sound like someone who has been listening to hindi music since the 1970's .. but my knowledge is limited to as i said the blips in the last 10 years or so. I was just thinking if i can dwell on some hindi songs with a twist .. the twist being the added knowledge about good old hyderabadi lingo :) as navjot sidhu would say, u can remove anup from hyderabad.. but u can't remove hyderabad from anup ..! (sigh) Following is a refresher course on commonly used/abused words in hyderabad and their marriage with some chart busters wherever i c
115 comments
Read more

June 20, 2008
Just when you thought i disappeared from the face of the most populous city of the second most populous country of the most populated planet... here i am.. back to college after a 2 month ' weight loss ' program called summer internship! ( 4hrs of traveling in the sweltering heat and you d agree with me) Being one of the lucky ones to have been to 5 of the 6 metros (Somehow never got a chance to go to BANDHladesh ... Kolkata for the uninitiated) i thought it would be fun to compare the road manners across the ones ive have lived in sufficiently and have had the privilege to experience : Hyderabad, Bengalooru and Mumbai . Congestion on roads is a common thread that connects all these cities.. but all the misery is to end soon .. what with the Bengalooru,Hyderabad and Mumbai metros coming up within no time.. just another 11-13 yrs ! But you never know.. the mumbai metro with a super charged Anil Ambani could be completed a few days before schedule and may be we can hav
105 comments
Read more

Anup
I am a sustainability professional who intends to save the planet from climate change in the day. As night falls, I am the vigilante dad dabbling on the journey of being trapped in 'The Dadosphere'! Sometimes the lines blur! ;)